Welcome to the United Church of Sun City 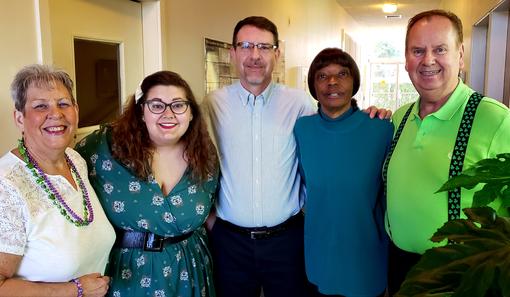 Our chancel choir has approximately 20 to 30 singers depending on the time of year as we have snowbirds who go back "home" for the summer and holidays. The anthems vary from classical through contemporary in style. We often use flute accompaniment with piano.  Our organist/pianist, Beverly Fletcher, is extremely gifted and has been at her craft for 50 years. She is also a singer.

The choir sings from the first Sunday in October and finishes the end of May.  They perform a Lenten cantata on Palm Sunday and an Advent/Christmas cantata the Sunday before Christmas.  The cantatas are accompanied by 13 musicians from the Phoenix Symphony Orchestra and Beverly. Young singers from ASU music department and valley music teachers join the choir for our two cantatas.  Our  soloists, Kira Kadel, soprano; Ron Cammel, bass; and Alan Paulson, tenor lead each section in the choir and perform special music and introits as trios, duets, and solos.

We have solo instrumentalists joining us throughout the year also from the Phoenix Symphony.  We are so fortunate to have an organist who is friends with them. And now we are!!

The choir rehearses before church at 8:30 a.m. on Sundays, from the Sunday after Labor Day through May. Our soloists stay on and perform special music and offertory music throughout the summer months.  Everyone is welcome and no audition is necessary.

Beverly Fletcher started at UCSC Jan. 2010. She grew up in a musical family, traveling, singing and giving sacred music programs with her mother, brother, and sister.  She started playing piano at age 5 and the organ at age 12. Ms. Fletcher holds two distinctions from the Royal Schools of Music in pianoforte and pianoforte duet, a Bachelor's degree in piano and organ performance, and a Master's degree in organ and voice performance.  Ms. Fletcher is a vocal and keyboard coach, specializing in the "vocally challenged", -those who think they can't sing. She began her teaching career in Scottsdale, AZ in 1965. She has been organist/choir director for a number of churches in the Phoenix and Tucson metropolitan areas, and also pianist at Temple Chai in Scottsdale.  For several years she sang with the ASU Choral Union. She feels singing is the greatest anti-depressant around, and her motto is "create beauty and love people". Above all, thanks to God, giver of every perfect gift to whose glory every performance is dedicated.

Kira Kadel is currently attending ASU as a psychology major, and she is an ariZoni nominated and NYA winning actress, and make-up designer. She recently began interning in the costume shop at ASU Lyric Opera Theatre and found her passion for sewing and theatrical costume design. A veteran actress, she has performed in over 40 community theater productions. Recently, she was Dorothy Brock in 42nd Street (NYA Winner, ariZoni Nom.), Ina Tortunesky in John Lennon and Me (ariZoni Nom.) and Dorothy Quimby in Ramona Quimby (ariZoni Nom.), all at Spotlight Youth Theatre. Kira also sings professionally with the Royal Renaissance Singers, and is thankful for the continuous support she receives from her boyfriend of seven years Jacob Funk.

Ginni Summers, Minister of Music, has been singing since she could talk.  She's a retired music/drama/choral teacher from Michigan.  While in Michigan, Ginni was choir director at a Presbyterian church for eight years and also at a Lutheran church for 12 years.  She was active in the University of Michigan Gilbert and Sullivan Society, having leads and chorus roles for 5+ years. Ginni was also in community theater in Monroe, Michigan as a music director and/or actor.

Ginni has been Minister of Music at UCSC for 8 years.  Since moving to Sun City, permanently in 2006, she has been playing chorus and leads in the Sun City Players Theater group; last seen as Golde in "Fiddler on the Roof" and also music director. She sings alto with the West Valley Chorale.

Her favorite thing about her job at UCSC is she is able to share her love of singing and the Lord every Sunday.

She first visited UCSC with her parents in 1985.  They were very active in the church and Ginni has always felt welcomed here.
You'll find Ginni in her office on Tuesdays from 9am to 2pm and on Sunday mornings before and after church.